Siberian Ginseng is an adaptogen with a rich history. Traditionally practitioners use the plants root for its, healing, balancing and energizing properties.

Potential health benefits of eleuthero include:

As a stimulant, eleuthero boosts energy levels and contains compounds known to help overcome exhaustion and prevent its side effects.

One  found that eleuthero consumption significantly increased the exhaustion point of swimming mice by lessening the build up of lactic acid and blood urea nitrogen, in addition to increasing fat utilization.

By increasing circulation, eleuthero may increase blood flow to the brain, improving mental functions such as memory and concentration.

Panax ginseng has been shown to have anti-cancer or anti-tumor properties.

Research suggests eleuthero may have similar properties, especially in cases of lung cancer, but this claim requires more research.

As a stimulant, eleuthero may increase the ability of muscles to do work, especially during periods of intense physical activity.

One  found that consuming 800 milligrams (mg) of eleuthero a day for 8 weeks increased a male subject's endurance time by 23 percent, peak oxygen saturation by 12 percent, and highest heart rate by 3 percent.

By boosting the immune system, eleuthero may improve or speed up the healing process.

Compounds in eleuthero have also been shown to prevent the formation of ulcers, including diabetic foot ulcers.

As a stimulant, eleuthero increases circulation and heart rate, and may raise blood pressure over time.

In several traditional medicines, eleuthero is used to increase muscle and bone strength.

Extracts of eleuthero and eleutherosides are known to bind to estrogen receptor sites.

Eleuthero may, therefore, lessen the effects of estrogen withdrawal in women who are experiencing menopause. For this reason, women with estrogen-driven cancer may need to consult their doctor before consuming eleuthero.

As an immune stimulant, eleuthero may shorten the length and severity of lung infections, such as influenza and pneumonia.

Eleutherosides have been shown to improve the lymphatic function of the lymph node network, meaning they may reduce edema. Edema is swelling caused by a build up of fluid.

A 2016 study found eleuthero powder significantly reduced edema within 2 and 4 hours after consumption in 50 healthy volunteers.

Several studies have shown that eleutherosides may help prevent and repair nerve damage.

Eleuthero has been explored, as a potential preventative or management medication for progressive neurological conditions, such as Alzheimer's disease.

One study found that eleuthero improved nerve regeneration and synapse reformation in rats with nerve damage.

Eleutherosides have been shown to reduce insulin resistance and are being considered for the management of type 2 diabetes.

A 2013 study found that 480 mg per day of eleuthero significantly lowered fasting and post-meal blood sugar levels in subjects with type 2 diabetes. 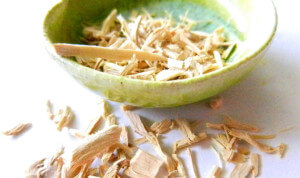 The effects of this herb providing benefits in two completely different situations (hot and cold climates) illustrates perfectly the definition of the modern term, "Adaptogen". Another example of Siberian Ginseng's adaptable qualities is that it can very effectively lower blood pressure in those with high numbers while it can bring it up for those that have very low pressure. I have had much success with lowering blood pressure in patients by simply combining equal parts of Chinese Hawthorn and Siberian Ginseng in an alcohol tincture.

Siberian Ginseng is more tonifying than the true Ginsengs (Panax sp.). It is neutral energetically and so is appropriate for daily use. Taken regularly, it enhances immune function, increases cortisone levels and anti-inflammatory response, and it promotes improved cognitive and physical performance in human studies. Also remember, unlike the Panax sp. it will lower high blood pressure, not raise it (unless it is already very low).

This amazing herb aids in the recovery from hard physical exercise, as well as from extreme mental exertion. It's reputation for this is fast becoming common knowledge all over the world. It is now commonly used by thousands of people who engage in high stress, high energy-demanding activities such as high altitude flying, long-distance sailing, working in high or low temperature environments or in deep water. Most competing athletic runners use it because they simply can not outrun the competition that does use it!

Siberian Ginseng is used by all Russian astronauts (cosmonauts). The use of the extract of this herb in these endeavors has been reported to increase physical strength, sharpen concentration, improve various parameters of mental power, increase visual acuity, improve color vision and to promote the natural healing power of the body.

In Chinese history, Li Shih Chen, in his Great Catalog of Medicinal Herbs, called Siberian Ginseng (Ci Wu Jia) a superior herb, indicating that he believed that Acanthopanax has a primarily tonic, anti-aging natural rather than a medicinal effect. He describes it in this way: "Its action is to invigorate physical energy, regulate vigor, strengthen the skeleton and tendons, and increase one's ambition. If administered over a long period of time, it can delay weakness and aging. Indications for its use include sexual debility, overly-frequent urination, lumbago (low-back pain), rheumatic pain in the legs and weakness of vigor and vitality." - Gratitude to www.naturalnews.com for this information.

Eleuthero is traditionally used to help rebuild Chi energy during the recovery period following any illness.

Normalizing body functions, Eleuthero is a powerful adaptogen and helps the body to balance, heal and to instill an overall sense of well-being.

It helps the liver to detox harmful toxins from radiation exposure.  In Russia, studies show that using Eleuthero Root removes the side effects from chemotherapy.  It also has been used to treat bone marrow suppression due to chemo or radiation therapy.

Researchers have found that it increases the synthesis of the interferon drug; that boosts the activity of the immune system, interfering with every viral infection stage. (Interferon is used for AIDS and Hepatitis C viral infections.)

It stimulates the activation of immune system components (B- and T-cells) that attack bacteria, making it a useful antiviral supplement in the treatment of many types of viral infection.

Chinese healers believe that Siberian Ginseng is an herbal sedative and one of the best remedies for insomnia.

Eleuthero has been successfully in treating bronchitis and other chronic lung conditions.

Siberian Ginseng may also be useful when the HPA (hypothalamic-pituitary-adrenal axis) is depleted, having symptoms that include fatigue, stress, neurasthenia and sore muscles associated with the hypo-functioning of an under-active endocrine system.

Recent evidence suggests that Eleuthero Root may prove valuable in the long-term management of various diseases of the immune system, including HIV, chronic fatigue syndrome and other autoimmune illnesses.

In men, it appears to stimulate the bodys production of testosterone and may be helpful in increasing sex drive and fighting impotence.

This herb owes its popularity to the broad spectrum of benefits it carries enhancing overall health and wellbeing I highly recommend you try taking eleuthero daily for a week so you can see how big of a difference a small change can make.

Eleuthero Side Effects and Contraindications

Do not take Siberian Ginseng if you suffer from hypertension.

How are herbal extracts made?
The raw herbs are prepared by hot water extraction, the water is then evaporated off until all that is left is the essential oils and active ingredients. These are then bound together in an excipient, small amounts of non-GM corn flour. This is the most pure and unadulterated way to enjoy tonic herbal extracts possible. Purity: this vegan product is free from wheat, gluten, soya, added sugar, salt, test, lactose, preservatives, or any other fillers. Not tested on animals.